Of Rats And Men

It was my birthday a few weeks ago and, despite me playing it down, my two cats got me a present anyway. Now, although they didn’t wrap it very well I must admit that I was still at least a little surprised when I came down to find a large brown rat sitting on top of the piano. After the first few seconds of utter panic had subsided to a mere terror, I took time to thank the pair for their thought and effort. This caused what could be described as a not unexpected furore of the scuttling of feet of various sizes, some shouts, the odd bang of a cat flap and, if my sense of smell serves me well, the spillage of a small amount of ammonia. Well after screams, jumping and running from both me and it, the wee beastie ended up inside the piano, so I took the front off and there it was, staring at me from behind the foot pedal. I could tell the poor animal was terrified  being cornered like that and as I stood wondering what to do, three words kept ringing in the back of my head “animal-mal-mal-mal\’, cornered-ed-ed-ed\’, \’terrified-ied-ied-ied” and a nagging suspicion that I had, somewhere in he past been told something about them.
I did however remember hearing about the nasty diseases you can get form rats (them being filthy sewer dwellers and all) so I decided that some kind of protective clothing was in order. Heading for the kitchen I strapped on the apron, donned the oven gloves and grabbed a wooden spoon. I then realised that the spoon, being only a few inches long was going to involve me getting my face far too close to the rat in order to perform anything like a convincing poke. So, putting the spoon in my apron pocket I grabbed a garden cane and, looking somewhere between Saint George and Anthony Worrel-Thompson, proceeded to poke it a bit to get it out. 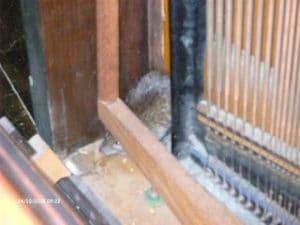 Well it got it out all right! With a squeal it jumped out of the piano towards me, causing me to fall backwards and scrabble for cover (I held on to the stick though) and then it ran for the gap under the fridge.

Knocked to the floor from my steed, I dropped the stick and went for my close-quarter combat weapon, and drawing the wooden spoon, tried to whack it a couple of times on the way but my aim was adrift and it made shelter unharmed (I swear it turned round and stuck two fingers up at me as it disappeared).
By this time the cats had come to see what the commotion was all about. When I quizzed them about it they both denied any involvement and even had the audacity to say “What rat?” and hint at the fact I may have imagined the whole episode, before sloping off to a safe distance.
I spent the next two hours tentatively shoving the fridge round, expecting it to jump and bite my face off at any minute.
It didn’t and I eventually found it hiding in the compressor space under the fridge. 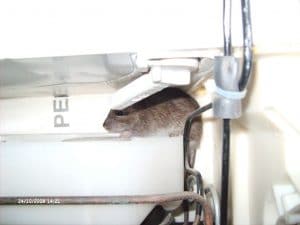 So there we sat, staring at each other for a good 20 minutes. It was clear that neither of us would back down, and despite me plonking a very disgruntled cat down almost nose-to-nose with it, I was getting no help from that quarter.
It was time for professional help, so I phoned Lucy
Her suggestion was that I “carefully poke it a bit with a stick” but I explained to her that it was quite averse to that approach and most likely to poke back.
In the end Lucy bought a humane trap and we laced it with peanut butter, which the man in the shop claimed was ‘their favourite\’. Putting aside images of the pied piper working as a MORI poll employee we set about lacing the trap.
We laid it by the fridge and carefully covered any gaps that might be used as escape routes to other rooms and left it to its fate.
Several hours passed and every once in a while we peered in through the kitchen window, like naughty children trying to steal pies. To our dismay, every time we looked, the trap door was still up.
I took an executive decision that this approach was not working and we shoud re-assess our strategy. It was here that we discovered that the sneaky little blighter was in fact no longer under the fridge but at some point, had made a daring run for it, across the dining room, into the kitchen and behind the dishwasher. It was Lucy’s keen ear that picked up a faint scratching and nibbling noise, and slowly pulling the dishwasher forward, we saw it, having ignored the lovingly prepared peanut butter sandwich, nibbling on a piece of cat food that it had found.
After struggling the dishwasher and washing machine about to form a ‘rat run’ we placed the trap in such a way that is only sensible route was toward the trap, which we placed at the end.
Just as we were told, the PB worked and we came down the next morning to a safely caged rat. 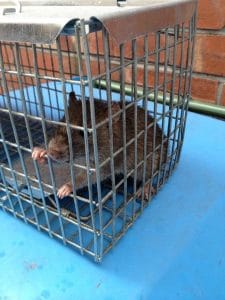 The other piece of advice we were given was that we should only release it when we were at least 10 miles from home as it would find its way back otherwise. Again, ignoring the images of the pied piper now being an expert on GPS and animal tagging, I put the cage in the boot of the car, drove out to Fittleworth at the foot of the South Downs and released it into the wild.

I now know exactly why fast moving things are described as being ‘like a rat out of a cage’!

Still, having done the right and proper thing, I can’t help but lie awake at night, half hearing, half imagining the cries of a litter of baby rats somewhere nearby “mummy, mummy, where are you?”
Isn’t nature great!